The tendency among participants in all categories was to leave known practices to add value; Gold was won by Grupo Puerto Las Palmas. 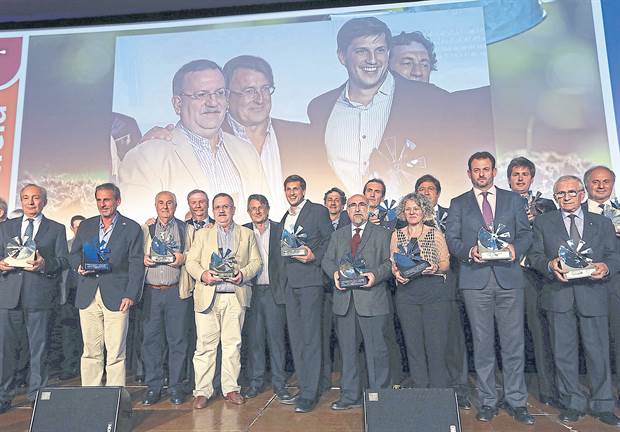 In what is already the end of the year celebration of the field, the sixteen awards for Agricultural Excellence and Gold were presented to the Puerto Las Palmas Group. The event organized by Banco Galicia and La Nación newspaper brought together about 300 guests at the central restaurant in Palermo, who followed suit with the winners of each category.
It was a night where optimism reigned and was different from that of the last editions for many reasons, the most visible being the presence of ministers and officials of the national and provincial governments. To check once again the change of political climate and the goodbye to the sterile confrontations of the past, it was enough to see the producers and entrepreneurs mixed up with Francisco Cabrera, Minister of Production, and with Leonardo Sarquis and Sergio Busso, Ministers of Agribusiness of Buenos Aires and Córdoba. They talked and listened at their discretion.
Another issue that made this edition different was the quality of the papers presented. They made it clear that the accent of the companies is definitively placed on innovation. It was not by chance that the category with the most participants was Innovation and Development, with 41 presentations. But the vocation to take a step beyond the areas of productive comfort where everything is controlled spilled into the rest of the categories. This is the case of farmers who, despite being very efficient at producing, are not satisfied and risk marketing meat. Or fruti horticultural producers that put brand to their products.
There were also those who integrate their production in a virtuous circle as was the case of the Puerto Las Palmas Group, which won Gold. In the town of La Leonesa, Chaco, they integrate the production of rice with the pacú, which they process in their fridge and market. They do not throw anything and use all the by-products in the rice processing and balancing plants. They transformed a region considered marginal to an area of high potential for rice and pacú production.
That capacity for transformation was also present in the rest of the prize participants and was the main cause of the night’s optimism.

It was awarded for its model of innovation and integration of productive and industrial activities. From being a family company that produces rice for 30 years in the town of La Leonesa, Chaco, to develop a system where the rice crop is rotated with the pacú to which they process and market in more than 12 different cuts. To complete the integration they installed plants for balanced extruded fish and rice processing. A unique scheme in the country.

They were awarded for their constant innovation in the production of seed potatoes in the Calchaquí valleys west of Tucumán. They are pioneers in the storage of seed potatoes, mechanization of production and now they have advanced with irrigation. They implemented a pressurized gravitational irrigation project with a dam and 40 kilometers of pipes to distribute the water in 400 productive hectares. They also added the production of lettuce to supply Mc Donald’s.

It vertically integrated its production in a marginal livestock region such as Mendoza and San Luis where they have breeding and feedlot fields. The company rents a refrigerator where it slaughters heifers and young steaks whose cuts and sausages it sells in Mendoza in three stores under the brand “Mi Estancia”. They also sell another quality of meat in two other stores under the Don Justo brand. On average they work 580 heads per month. They have 4 trucks of their own.

It is the largest lemon producer in the country in a single cloth with 4000 hectares of plantation. They are watered by the localized drop-type irrigation system and works by gravitational force. It uses the slope of the land to transfer the water stored in two dams fed by natural sources of water: from the river and from the precipitations. It does not require external energy, nor does it use fuels. It is an eco-friendly system, it does not generate pollution, nor does it affect the aquifer.

He developed the first herbal spa in the country with an excellent service in wellness tourism. Per Aqua is a rural company dedicated to the development of relaxation and gourmet products and to phytotherapeutic health services. The gourmet line has products such as jalapeño peppers, ground herbs, seasonings and vinegars, spicy salts, flavored wines and coffees. Per Aqua products integrate the so-called natural foods without preservatives.

By understanding that in agricultural education “the digitalization of agriculture” is a fundamental discipline for students, this educational institution implemented a novel program. They train teachers in digitalization; they incorporated equipment and software for students with hours of case practice and deepened the interrelation between the different disciplines such as biology, agronomy and mathematics.

Last year they achieved record individual productions. On a rodeo of 7000 milking cows, they obtained 36.5 liters per cow of average annual production. The rodeo is distributed in two modules with a rotating platform for milking that has a capacity to milk more than 500 cows per hour. This allows milking the entire rodeo three times a day. Since 2005, Adeco has been producing milk in 100% dairy farms with a bed of sand.

They were awarded for their model of integration and high productivity. They obtained a delivery rate of 92.6% and 2.56 deliveries per female per year. In post weaning and fattening achieved daily gains of 511 and 942 grams respectively. In terms of integration, the production of cereals and oilseeds from their fields in Bolívar are the basis of feeding the pig farm. They sell their animals via media res or processed under the La Ibérica brand.

Its revolutionary head for corn model MDD-100 allows harvesting in multiple distances between lines or directions of advance without adjustment, keeping the collection losses limited and without resigning productivity. It is one of the most recognized products nationally and internationally. The head is located in the markets of the USA, Canada, South Africa, Australia, Mexico and Colombia. In US, there are more than 60 teams working.

They are managed with the principles of responsible forest management established by the Forest Stewardship Council, certified by external audits. The FSC seal on the products guarantees traceability from the forest to the consumer. They also carry out an intensive management that allows maximizing the production of quality wood, increasing the proportion destined to high added value products. They process 300,000 annual tons of eucalyptus and pine for offset boards.

They achieve that the production of the 1200 hectares of the Alto Valle of apples, pears, peaches, peaches, plums and apricots, that they pack and conserve, is marketed as high quality fruits and can capture the best prices. In addition, thanks to its refrigeration capacity, which reaches 35,000 tons, they can distribute and sell their fruit throughout the year despite the marked seasonality of production.

He was awarded for the result of the sales of Angus and Hereford players in his three annual auctions. In Angus, 311 PC bulls averaged 62,952 pesos resulting in 32% higher in price to the main cabins and 46% over the auctions sponsored by the race. While in the Hereford breed about 173 PR bulls obtained an average of 55,177 pesos, 36% higher than the main cabins.

They obtained the first cultivar of Festuca Arundinacea developed by an Argentine company that will be introduced in the North American market. Growing allows solving the problems of lack of permanence in climate zones with high temperatures. It is the result of integrated research between Gentos, the Samuel Roberts Noble Foundation of Oklahoma and Agrisearch Grasslands of New Zealand.

When diagnosing that the cause of the social questioning to the productive activity of the land is the ignorance, Aapresid undertook the Aapresid Classroom Project that impelled the partners of the 37 regional ones to develop oral dissertations in schools of the different localities. Since 2009, 280 talks have been registered with more than 12,000 attendees in 9 provinces with the participation of more than 50 members and 25 speakers.

For 34 years they have been making fodder reserves. They have the idea of not increasing the number of clients but each client to increase their chopping surface. Last season they exceeded 13,500 hectares silage with the same customers as ten years ago. To provide a better service, they installed a portable laboratory that analyzes the silage that is left to the producer in the field.

When applying nanotechnology they obtained a different 2.4 D formulation with great comparative advantages that were already proven in more than 5 million hectares. Use up to 50% less active ingredient per hectare to exercise the desired control, while providing additional benefits such as low odor, low volatility and not inactivate in hard water. It discontinues the use of any adjuvant.